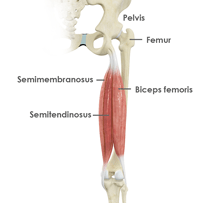 The three hamstring muscles (semitendinosus, semimembranosus and biceps femoris) run down the back of the thigh and function to bend (flex) the knee and extend the hip.

Hamstring injuries most often involve a strain or partial tear of the muscle in the thigh. These injuries are common in athletes who participate in sports that involve running such as track, soccer, and basketball. Hamstring strains lead to pain and sometimes swelling in the back of the thigh, but healing occurs with rest and rehabilitation. Re-injury is common if return to sport precedes complete healing.

After surgery, you may need to use crutches and possibly a brace to protect your repair and keep it in a relaxed position. Your doctor will advise physical therapy, involving gentle stretching exercises, to restore normal function. Rehabilitation period of at least 3 to 6 months may be needed before returning to athletic activities.