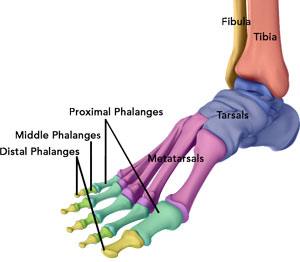 Bones of the Ankle

The ankle joint connects the leg with the foot, and is composed of three bones: tibia, fibula and talus. The tibia (or shin bone) and fibula are bones of the lower leg which articulate with the talus or ankle bone, enabling up and down movement of the foot.

Three bony bumps present on the ends of the tibia and fibula form parts of the ankle joint:

There are 33 joints in the ankle and foot. They include the

The joints of the foot and ankle provide stability and support the weight of the body, helping you to walk or run, and to adapt to uneven ground.

The joint surface of all bones of the ankle and foot are lined by a thin, tough, flexible, and slippery surface called articular cartilage, which acts as a shock absorber and cushion to reduce friction between the bones. The cartilage is lubricated by synovial fluid, which further enables smooth movement of the bones.

Soft Tissues of the Ankle and Foot

Our foot and ankle bones are held in place and supported by various soft tissues such as cartilage, ligaments, muscles, tendons and bursae.

Cartilage is the flexible, shiny, smooth tissue on the ends of bones that meet to form a joint. Cartilage provides cushioning between the bones allowing smooth movement.